Sen. Toomey strikes out at baseball games across PA

Keystone Progress calls him "Designated Hitter for the insurance industry."

YORK, PA – On Tuesday night, Keystone Progress will commemorated Sen. Toomey’s record on the Affordable Care Act with a personal baseball card highlighting his “stats” at the York Revolution opening game in York.  This was one of many similar events organized in support of the ACA. 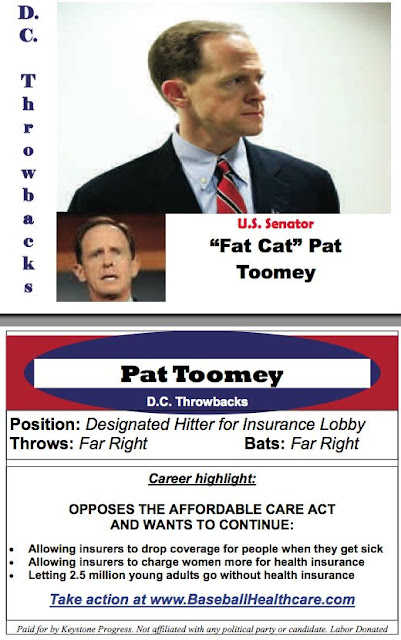 “Toomey is throwing a curveball to York residents, who would benefit from the Affordable Care Act through added consumer protections from insurance company abuses," added Morrill.

Keystone Progress has already distributed thousands of similar cards outside baseball games in Harrisburg, Allentown, Lancaster and York.  There will be similar events in other communities in the next few months.

Posted by Keystone Progress at 5:07 AM