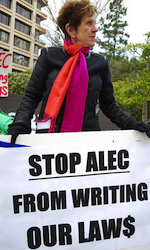 The grassroots efforts of Keystone Progress continue to pay huge dividends in PA.  We're now at 16 legislators who have quit ALEC.

Greenleaf wrote to Keystone Progress, saying "I have a membership with ALEC but because of concerns that have raised by my constituents I will not be renewing it."

Greenleaf is the 7th PA Republican to quit ALEC.  Overall, 60 legislators have told Keystone Progress that they are not members of ALEC.  KP has letters, emails or voice messages from all 60 to verify their disaffiliation.

You can help us get more legislators to quit, or see the entire list at wwwJustSayNoToALEC.com
Posted by Keystone Progress at 4:40 AM