Good government groups held a news conference decrying the proposed House rule changes which would restrict the ability of elected Representatives to do their jobs effectively. Under these new rules, the majority party would be able to control legislation in the Rules Committee. The Rules Committee would be allowed to restrict amendments from the minority party and would be able to table amendments without cause, effectively prohibiting amendments from ever being voted on.

The rule changes also cut back minority representation on each House Committee. The proposed changes will create committees of 15 Republicans and only 9 Democrats. With a more equitable balance, minority amendments can pass with a few supporters from the majority party. This unfair formula effectively means that proposals from the minority representatives have little chance of passage.

Pennsylvanians want real reform in Harrisburg, but these moves bring us back to the old days of back door deals. If these rule changes pass, it will erode our rights to fair and equal representation. This move is regressive and counter to the reform Pennsylvanians have been promised and expect.

Posted by Keystone Progress at 2:07 PM No comments:

Rutgers report dispels many myths about charters' funding and performance

EAST LANSING, Mich. (Jan. 27, 2011) — In a blow to conventional wisdom, New York City charter schools are not outperforming traditional public schools and are not inadequately funded, according to a new study out of Rutgers University.

New York City charter schools are often held up as an example of how charter schools are outperforming traditional public schools and doing it with less money, which in turn is used to justify increased public funding for charters. Such assumptions do not hold water, according to the study, "Adding Up the Spending: Fiscal Disparities and Philanthropy among New York City Charter Schools," authored by Rutgers education professor Bruce Baker and Rutgers doctoral student Richard Ferris.

The study was produced by the National Education Policy Center (NEPC), housed at the University of Colorado at Boulder School of Education, with funding from the Great Lakes Center for Education Research and Practice.

The study shows that New York City charter schools are not underfunded compared with traditional public schools. One reason for this is because the city's charter schools serve a much smaller percentage of students who are very poor or still learning English. These populations require far more resources, and they must be accounted for when making comparisons between charters and non-charters, Baker and Ferris noted.

"The assumption that these charter schools should receive support equal to traditional public schools is incorrect, because they do not serve similar populations," Baker and Ferris wrote.

The study also found that on average, charter schools are not outperforming traditional public schools. After controlling for population and environmental factors, there is no statistically significant difference between charters and non-charters in performance for grades 4, 6 and 7. Meanwhile, 5th-grade charter school students underperformed their peers enrolled in traditional public schools, according to the study.

Based on their research, Baker and Ferris recommend that public funding be more tightly linked to the needs to students attending all schools, whether they're traditional public schools or charter schools. The researchers also suggest policymakers conduct annual audits of school funding levels and perhaps consider sanctioning schools that fail to adequately serve students with greater needs.

To read Baker and Ferris' full report, go to: www.greatlakescenter.org.

Posted by Keystone Progress at 9:31 AM No comments:

This over the top language was condemned during the campaign as inflammatory. Was the shooter influenced by this? Will others follow? 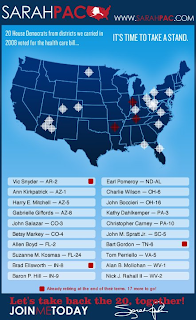 Posted by Keystone Progress at 2:14 PM No comments:

What would Sarah Palin say about the PA Progressive Summit?

You can listen to Sarah's advice, or you can register for the Pennsylvania Progressive Summit here.

The Pennsylvania Progressive Summit is only a little more than 2 weeks away! Hundreds of progressive activists will be gathering at the Sheraton Station Square on the weekend of January 22-23.

We have an incredible weekend planned that will educate and motivate us to work for victories and fight back the right-wing attacks on our hard-won gains.

Here are a few highlights:

· 72 workshops on issues and organizing techniques and skills;

· An Organizer Training Track, organized by Democracy for America with support from Keystone Progress. This track includes 18 sessions on Field, Communications/Messaging, Online Organizing/Social Media and Fundraising/Finance.

· Regional, issue and identity caucuses to help us get better organized;

But space is limited! Register today to make sure you don’t miss out!

And make sure you reserve your hotel room at the discounted Summit rate. Click here to make sure you don’t miss out on the savings.

Posted by Keystone Progress at 1:08 AM No comments: