LGBT leaders and the allies wiated two hours for an apology from Senator Eichelberger. He gave us about one minute, took our petitons, refused to apologive, then turned his back and left.
The video below is unedited, bad sound and all, so that no one can say anything is "out of context."

Presente and Keystone Progress are circulating our new "I stand with "Sotomayor" poster. Feel free to copy to use on your websites, Facebook profiles, etc. 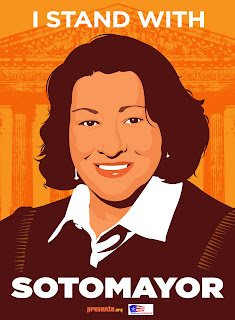 Eichelberger still can't apologize. Still blaming us for his words.

And take action at http://www.WeExist.us

Posted by Keystone Progress at 5:07 AM 2 comments:

Eilchelberger makes statement, of a sort

Senator Eichelberger has finally made a statement about his outrageous comments concerning LGBT people. Did he apologize for calling lesbians and gays “dysfunctional?” No.

Did he admit that he was wrong for saying of same-sex couples that “we are allowing them to exist?” No.

Instead, he blamed us for pointing out the truth. Here’s his statement to WJAC-TV: "This group [Keystone Progress] is a politically active group that goes around the country targeting people that are involved in this issue. If this is an example of how they conduct themselves then it's difficult to continue dialogue and discussion, if people intentionally misportray the truth."

Had enough of Eichelberger? Take action at: www.WeExist.us

Posted by Keystone Progress at 7:48 PM No comments:

Sen. Eichelberg on Same-sex couples: "We're allowing them to exist"

Check out our new video of Sen. Eichelberg making his bigoted comments:
You can take action at: www.WeExist.us
You can hear the entire debate at: http://www.whyy.org/91FM/radiotimes.html
Posted by Keystone Progress at 12:32 PM No comments:

Join HCAN in DC on June 25 for Healthcare Reform

Posted by Keystone Progress at 12:31 PM No comments:

Join us in Washington for a Healthcare Reform Rally- June 25

Healthcare for all rally in Harrisburg, June 11

Healthcare for All PA, and a coalition of like-minded organizations that includes the Pa. AFL-CIO; Pa. Council of Churches; Pa. Association of Staff Nurses and Allied Professionals (PASNAP); The American Medical Student Association (AMSA); Pa. League of Women Voters, and others invites you to join us in Harrisburg on Thursday, June 11 from 11AM to 12:30 PM for a RALLY FOR SINGLE-PAYER HEALTHCARE FOR ALL on the Capitol Steps. Entertainment kicks off at 11 AM followed by speakers you won’t want to miss beginning at 11:30 AM. Speakers will include Donna Smith (star of Michael Moore’s “SiCKO”); Bill George (President of the Pa. AFL-CIO); Walter Tsou (nationally recognized expert and consultant on public healthcare reform and former Philadelphia Health Commissioner); Chuck Pennacchio (Executive Director of HealthCare For ALLPA and 2006 Primary candidate for the Pa. Democratic Senate race) and several more including some to be announced.

Help us spread the word far and wide. Let’s fill those Capitol steps and send a real message to the Legislature and the media that we are a mass movement that wants real healthcare for all NOW!! EVERYBODY IN. NOBODY OUT!

Email action@healthcareforallpa.org with questions, need a ride, or have room for passengers.

Taking on the Big Boys, Taking Back Our Health Care System
The savings the taxpayers in each county of Pennsylvania will see under the passage of the Family and Business Health Security Act are listed here.

Healthcare for All Pennsylvania is proud to announce the launching of our 'Print-and-Post' flier campaign to spread the good word about the only proven answer to our healthcare crisis: the Single Payer Solution. SO GO WILD! Print-and-then-Post wherever you work, play, and socialize. Click here for your copy of our flier.

Posted by Keystone Progress at 1:04 PM No comments:

Arlen Specter has switched teams in mid-season.  He says he's ready to play the game as a true progressive, but after years of being the guy that George W. Bush called his "firm ally when it mattered most," a lot of us are waiting to see if he's ready to knock it out of the park on progressive issues or whether he'll  strikeout when his vote really matters for the progressive team.

Specter Scorecard will do two things:

It will keep you informed about key upcoming votes where Sen. Specter's vote will be vital to the success of the progressive position.  We'll give you accurate information about the issue and we'll provide you with the opportunity to take action to help persuade Arlen to do the right thing.

We'll let you know how Sen. Specter has voted on important progressive issues since he made the switch.  We'll display his "progressive batting average" and keep it updated when he takes votes on those issues.

Posted by Keystone Progress at 8:21 AM No comments: