These are important stories ignored by the so-called "liberal" media this year.

Posted by Keystone Progress at 8:52 AM No comments:

It's About Love: Allentown says no to H8 and Prop 8

Our second video from Pennsylvania's Lehigh Valley. This noe showing the good folks standing up against hatred and bigotry. From Allentown, PA, November 16, 2008.

And our other video, showing the dark side from Bethlehem on October 8, 2008

During the presidential campaign, Barack Obama was called mentally
unstable; his supporters were called unpatriotic. At Sarah Palin
rallies, in newspaper letters-to-the-editor, on conservative radio and
TV talk shows, supporters spewed hatreds, resorting to the Bush tactics
of fear mongering to support their own candidate.

At many rallies, the word "kill" was often shouted. The ultra right
wing, which infiltrated the McCain campaign, told us Obama is a (gasp!)
Muslim, not understanding that not only isn't Obama a Muslim, but that
the Constitution prohibits religion as a test for federal office.
Falsely linking Muslim to terrorist, these ultra-patriots said that
Obama pals around with terrorists. They said Obama is a thief, a liar,
and a scoundrel.

Not so subtly disguised beneath a lot of the hatred is the reality that
Obama is multiracial, and that means he isn't White. Some of the racism
isn't even covert. In comments to newspapers and on radio, Obama was
called "Monkey ears" and other terms that would denigrate every person
of color. At one rally, a McCain-Palin supporter waved around a stuffed
monkey with a blue-and-white headband with one word: Obama. It didn't
even take an investigative journalist to find supporters who brazenly
claimed they just couldn't vote for anyone who's "colored"; many even
used even more derogatory terms.

Ironically, although the establishment media did an admirable job of
covering speeches, they did a poor job of covering the racial hatred
present at rallies. It was up to sites like Keystone Progress, which
videotaped numerous rallies and posted them on You Tube, to help a
nation better understand not only the political division but the racial
hatreds that still exist in the country. Mike Morrill of Keystone
Progress says that he noted a significant difference not only between
the Obama-Biden and McCain-Palin rallies--"hope versus fear"--but more
racist anger in the rallies where Palin was the primary speaker.

There is still that anger and fear among a part of the conservative
movement, but, something changed with the election.
On television, you'll find there are more Blacks in TV commercials. More
Blacks are being interviewed. The news media have developed a
fascination with Blacks who were in the Civil Rights movement of the
'60s. Blacks whose parents were in the civil rights movement. Blacks who
were first time voters.
Barack Obama's campaign and election have not only revitalized America's
Black population, they have revitalized media interest in minorities.

For a couple of centuries, most newsrooms were staffed only by White
men. And then there were a few women. And then a few other minorities.
Blacks. Latinos. Asian-Americans. Native Americans. Jews. And an
occasional Buddhist or Muslim. Staffing has come a long way. Almost 14
percent of newsrooms have at least one minority, up from 4 percent 30
years ago, according to studies conducted by the American Society of
Newspaper Editors. However, one-third of America is composed of
minorities, so there is still a long way to go. Even today, four decades
after Martin Luther King's murder, and with a heavy campaign by several
journalism organizations, about 40 percent of all newspaper newsrooms
still have no minorities.
In many rural and suburban cities, just about the only time a newspaper
reader sees a minority in a picture is not for an achievement, with the
exception of the sports pages, but during an arrest.

For a long time, radio believed that a white male voice was more
authoritative than a female voice, or a voice that sounded Black. For
most of TV's first 20 years, there were no Blacks on air. And when the
Civil Rights movement in the 1960s shocked America to realize that
Blacks might be just as competent as Whites, TV reluctantly hired
Blacks--as long as they looked, acted, and spoke White.

We're now seeing more coverage of Blacks About Blacks. If it isn't a
"fad," if the media, especially TV, don't return to their never-ending
focus upon celebrities and fluff, maybe in four years there will be more
minorities in our newsrooms, and Americans will understand that most
Blacks aren't on welfare, in gangs, or in prison.

Dr. Brasch is the author of the recently-published Sinking the Ship of
State: The Presidency of George W. Bush, available at amazon.com,
bn.com, and numerous independent and chain stores. He is professor of
journalism at Bloomsburg University. You may contact him through his
website, www.walterbrasch.com <http://www.walterbrasch.com/> or by
e-mail at brasch@bloomu.edu <mailto:brasch@bloomu.edu>
Posted by Keystone Progress at 5:58 AM No comments: 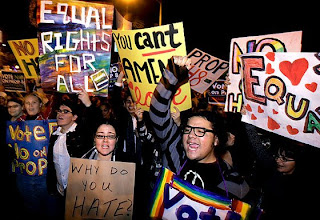 Most of us were exhilarated last week at the election results here in Pennsylvania. It was a resounding rejection of the politics of hate and division. It was an affirmation of hope over fear.

Unfortunately, the results were bittersweet, especially in California, where Proposition 8 overturned the right of same-sex couples to marry and wrote discrimination into the state’s constitution.

Even though we are 3,000 miles away, we can show our outrage at the denial of civil rights and express our solidarity with gays, lesbians and their supporters in California who have vowed to fight to overturn Prop 8. Here are 3 things you can do: